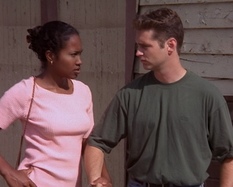 While traveling through rural America, Brandon has car trouble and gets stuck in a backwater, racist town that appears to be stuck in the 1950s. David gets stressed out when the music video he and Donna are producing for MZA goes over-budget, and he takes out his frustrations on Donna. Valerie gets bookkeeping help for the After Dark from a dorky accountant named Kenny. 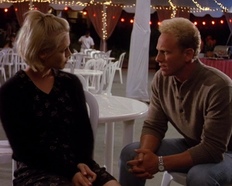 Steve confesses to Kelly that after they doinked in high school, he spread a rumor that she was a slut. Clare is icked out when she learns about the sexual history between Steve and Kelly. Donna and David bicker throughout the episode, then finally call it quits...again. 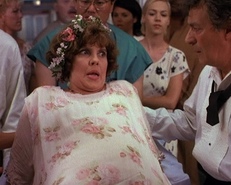 Joan's daughter Lily arrives in L.A. for her mom's/Nat's wedding and hits the sheets with Brandon. Kelly continues her volunteer work at the Friendship House and hits it off with an upbeat AIDS-afflicted resident named Jimmy. Joan goes into labor during her wedding ceremony and is rushed to the hospital, where she delivers a baby boy.

Kelly freaks out after she accidentally gets some of Jimmy's blood on her hands following a kitchen mishap at the Friendship House. Brandon and Mark welcome Tracy Gaylian aboard CU TV as the new anchor, despite her inexperience and fear of cameras. Valerie and Kenny continue their blechy affair. 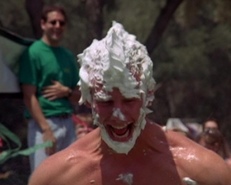 Steve and his KEG brothers lather shaving cream on their faces and genitals and moon Chancellor Arnold during Spirit Day, but the prank goes awry when lawn sprinklers wash away the shaving cream. Valerie gets pissed at Kenny when he stands her up to spend time with his family. AIDS-afflicted Jimmy takes a sudden turn for the worse, and his death saddens and angers Kelly. Kerri Strug has a pointless cameo. 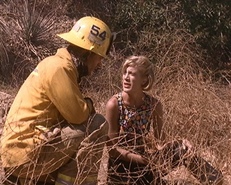 A pool party at David's/Mark's Hollywood Hills house is cut short when a wildfire threatens the area. As the fire rages, Donna risks her safety to save a baby deer and has to be rescued by a sexy fireman named Cliff. Kenny puts his romance with Valerie on hold after he claims that his divorce is getting messy, and Valerie shocks him with the news that she's pregnant. 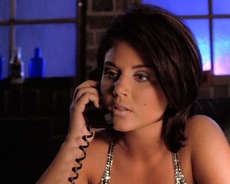 Clare refuses to get back together with Steve, so Steve hires an escort to the After Dark Halloween party to make Clare jealous...but the plan misfires. Brandon is intrigued by Tracy after she refuses to be his date for the party, Mark gives Kelly two books that describe his personality, and Donna and Cliff enjoy the start of their budding romance. Valerie continues to lie to Kenny about being pregnant and extorts 100K from him in exchange for a fake abortion. 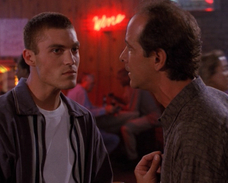 Kelly and Steve begin to doubt Valerie's claim that she had an abortion, which leads them to wonder if she was ever pregnant in the first place. Mel is concerned when David inherits 250K from his grandfather's estate. Donna is disappointed to learn that Cliff is leaving California forever, and Tracy is mortified when Brandon rejects her advances. 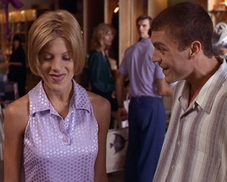 When Brandon learns of Valerie's pregnancy/abortion/100K extortion situation, he pressures her to come clean and return the money to Kenny. David's excitement at inheriting 250K from his grandfather turns him into a manic spend-a-holic, and he goes on a wild shopping spree. Clare dumps Dick and reignites her shitty relationship with Steve. 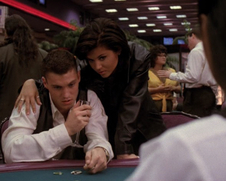 David treats Steve, Clare, and Valerie to a trip to Las Vegas...and soon gets out-of-control drunk and robbed by two sexy con artists. Brandon helps a pretty redheaded damsel in distress, and Mark promises to be patient with Kelly while she mentally prepares herself to maybe hit the sheets with him. 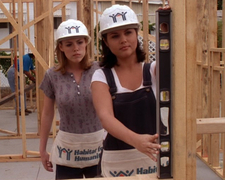 The gang helps Willie the Cook build his dream home, courtesy of Habitat for Humanity. Steve faces expulsion from CU for plagiarizing Brandon's term paper. David has a meltdown and is placed under observation in the psych ward. Kelly and Mark get food poisoning after dining in a five-star restaurant in Montecito. 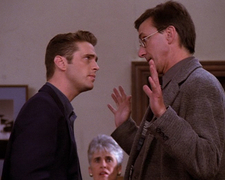 Steve pleads guilty to plagiarism, while Brandon refuses to admit wrongdoing and faces a disciplinary tribunal. Kelly throws Mark a surprise birthday party, but he hates it and acts like a peeved little bitch all evening. David decides to invest in the After Dark, and Donna needlessly gives him her blessing. 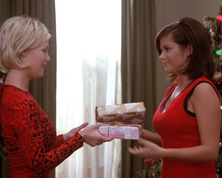 Donna gets irked at Felice after she blurts out a series of insulting zingers during a dinner party at Mel's and Jackie's condo. Kelly is stunned to learn that she has a half-sister named Joy. Tracy and Brandon struggle with what to buy each other for Christmas. Steve and Clare are icked out when his mom and her dad hit it off at a holiday party. 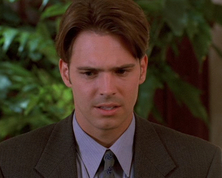 Mark has a major freakout when Brandon wins the prestigious Dryer scholarship and he doesn't. Valerie's old boyfriend, Tom, arrives in Los Angeles...and Valerie tells David she wants to hire Tom to co-manage the After Dark. Donna fills in as receptionist at her dad's medical office and helps save a hapless patient's life. 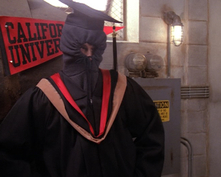 While doing his campus community service, Steve discovers who the elusive "Phantom of CU" is, but agrees to keep his identity hidden. Kelly humors Donna by going on a date with CUTV's shy camera man (Evan), but it's clear she isn't into him. Donna gets frightening garbled messages from a stalker after becoming CUTV's superfluous weather girl. 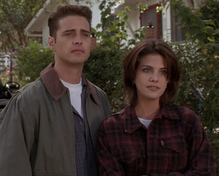 Donna is convinced that Garrett Slan is her stalker after she spots him on the CU campus. Brandon and Tracy spend a weekend at the Gaylian Ranch and engage in their first doink. Steve and Dick form an alliance and sell French football/soccer t-shirts during Superbowl weekend. 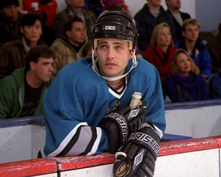 Donna gets rattled when attempted rapist Garrett Slan follows her around and tries to warn her about another psychopath who's become hopelessly obsessed with her. Kelly becomes smitten with Tom, much to the displeasure of Valerie. Brandon and Tom butt heads when they play on opposite teams of a charity hockey game. 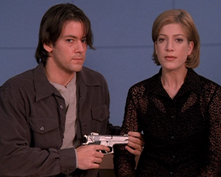 Evan reveals himself as Donna's stalker, then holds her and a bunch of other people hostage inside the CUTV building. 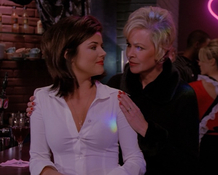 Valerie wigs out when her mother, Michelle Phillips, comes to L.A. for a visit. Donna is pleasantly surprised when Cliff (the hot fireman) returns to town, and Tracy finds the diamond ring that Brandon bought for Kelly and mistakenly thinks it's for her. 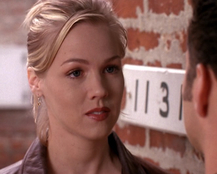 Brandon returns the engagement ring he bought for Kelly years ago, which appeases Tracy. Valerie tells her mother about the abuse she suffered at her father's hands, and eventually the two make nice. Chloe strips down to her bra for David, leading Donna to believe that she and David are sleeping together. 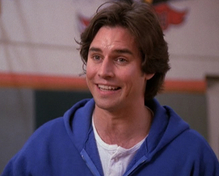 Dick Harrison dies of an overdose after snorting heroin at the After Dark. Kelly and Clare go to Palm Desert to relax at a spa and pretend to be Ukrainian folk dancers. 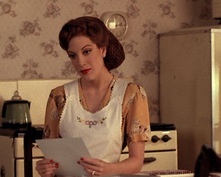 Donna and David pay a visit to Donna's grandmother, who tells them all about how she and her late husband met. Kelly finds a young boy sleeping on her deck furniture and takes a really long time reporting it to the authorities. Valerie becomes smitten with a hot new film star. 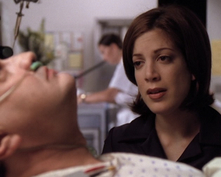 Joey reappears at the beach house, and Kelly is able to get in touch with his parents in New Mexico and get him shipped home. Clare turns the tables on Steve's boorish behavior and pretends she's getting regular testosterone shots. Dr. Martin has a stroke in his office and collapses in David's arms. 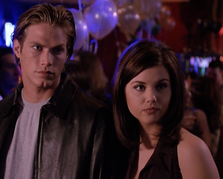 Brandon takes Tracy along to Hong Kong and tells his dad he's not really into her. Kelly gets drunk at the After Dark and almost loses the ex-engagement ring that Brandon gave her. Jason Lewis gets mad at Valerie for accepting bribe money to manipulate him into agreeing to be in terrible movies, then offers her the job as his manager. 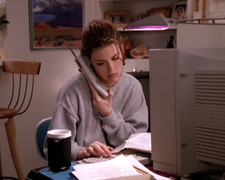 Tracy is irked when Brandon's [Hadley City] friend, Mariah, comes to L.A. and bonds with Kelly. Jason Lewis is crushed when his movie turns out to be a dud, then packs it in and moves back to Indiana. Clare damages her computer when she spills hot coffee on it and blames Steve. 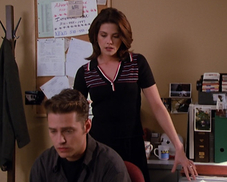 Brandon dumps Tracy so he can re-hook up with Kelly. Donna is distressed when she sees her mother hanging out with a former lover. Clare enters a talent show and surprises everyone with her lovely singing voice. 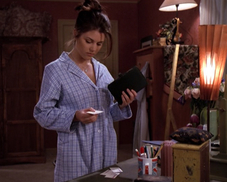 Kelly and Brandon become a couple again. Valerie's attempt to stir up trouble between Kelly and her roommates backfires. Brandon, Steve, and David are arrested for grand theft auto after an unauthorized test drive. 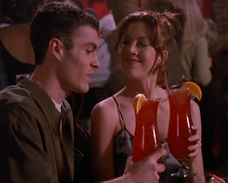 David treats Donna to a trip to New Orleans and tries to deflower her, but she backs out at the last second and refuses to seal the deal. Brandon takes care of Kelly and Valerie when they both come down with the flu. Clare gets mad at Steve when his mother dumps her father. 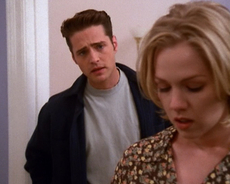 Kelly wigs out when she discovers she's pregnant. Valerie manipulates David into buying her out of the After Dark. Clare bitches at Steve for not being sensitive enough to her motherlessness on the eve of Mother's Day. 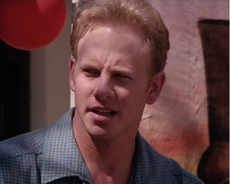 Kelly is bummed when she learns she has endometriosis. Steve is dismayed when his dad cuts him off financially. Valerie unwittingly hands over her life savings to an embezzler. 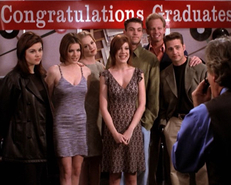 Valerie threatens to commit suicide when Brandon tries to evict her from Casa Walsh. Bill Taylor throws a lavish graduation party for Kelly and her friends. Donna puts on a new white teddy...and, amid a lot of lit candles, finally loses her virginity to David.