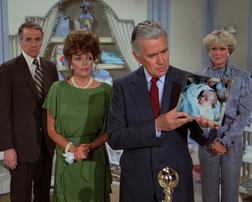 Krystle finds Blake stumbling around the mountain trail at Sky Crest and rushes him to the hospital. Fallon and Jeff continue to wring their hands over the disappearance of their baby. Claudia acts squirrellier than ever, but no one suspects her of kidnapping the tot. Cecil clings to life in a plastic bubble. 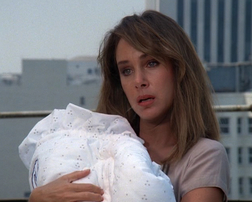 Claudia becomes the prime suspect in the kidnapping of Baby Blake and eventually gets cornered by police on a hotel rooftop...but the "baby" she's been toting around turns out to be nothing more than a doll. 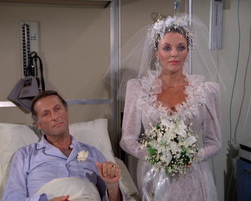 Baby Blake is safely rescued from his kidnapper, Alfred Grimes, and reunited with his family. Fallon tells Blake she wants to move out of the mansion and live a more meaningful life. Alexis marries Cecil minutes before he suffers a fatal heart attack. 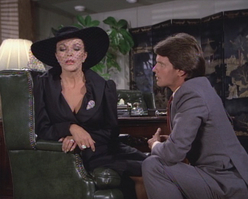 During the reading of Cecil's will, Alexis learns that she has inherited most of her husband's wealth, while Blake is shocked to discover that Logan Rhinewood and Cecil were the same person. Fallon and Adam have an incestuous encounter at the La Mirada Hotel. 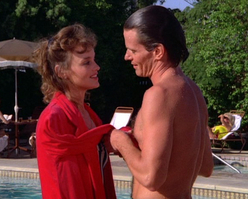 Fallon learns that Adam is her half-brother, which effectively puts an end to their icky flirtation. Blake and Krystle travel to Montana to look into Adam's past...and Adam finds out and gets pissed off. Alexis makes contact with Krystle's first husband, Mark Jennings. 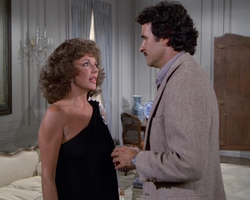 Mark Jennings moves to Denver and applies for a job at Fallon's hotel. Jeff decides to return to ColbyCo, much to Adam's dismay. Blake invites Joseph's daughter, Kirby, to move into Carrington manor. 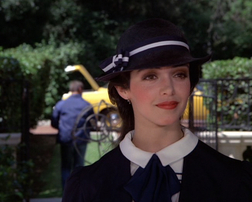 Krystle encounters Mark at the La Mirage and makes it clear that she wants nothing to do with him. Jeff continues to alienate Adam when he orders him to vacate his office at ColbyCo so he can take it over. Kirby Anders arrives at Carrington manor and looks like she might be smitten with Jeff. 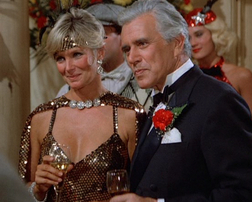 Fallon throws a grand opening party at the La Mirage and makes a drunken spectacle of herself. Congressman McVane abandons Alexis in favor of Team Blake. Mark tells Krystle they're still legally married. 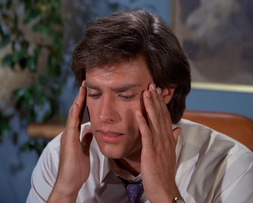 Jeff grows increasingly ill as the paint on his office walls poisons him. Krystle travels to Mexico to investigate hers/Mark's divorce, and learns that they're still legally married. Kirby flirts with Jeff and gets icked out by Adam again. 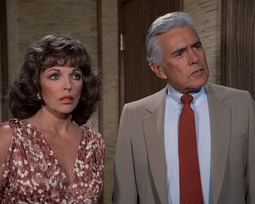 Krystle and Mark share a few tender moments at the La Mirage as they discuss legally ending their marriage. Kirby continues to flirt with Jeff, then gets propositioned by Adam. Blake and Alexis fly to Bali to begin the search for Steven. 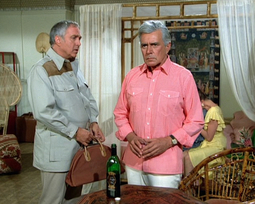 Blake refuses to accept the possibility that Steven died during the oil rig explosion and enlists the aid of a famous psychic to help locate him. Adam lures Kirby to his penthouse and rapes her. Jeff grows increasingly ill from the toxic paint on his office walls and starts hallucinating. 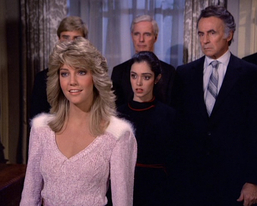 Blake and Dehner continue to try to make contact with Steven, much to Krystle's dismay. Alexis holds a memorial service for Steven, which Blake refuses to attend. Sammy Jo returns to Denver with a bundle of joy. 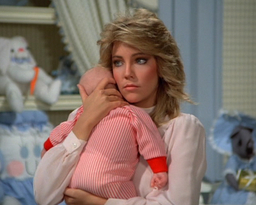 Sammy Jo leaves her baby with Blake and Krystle, then heads off to New York to pursue a modelling career. Alexis drops by the La Mirage and enjoys a sexy nooner with Mark. A mysterious man (er...Steven), who has bandages wrapped around his entire head, wakes up in a hospital in Singapore. 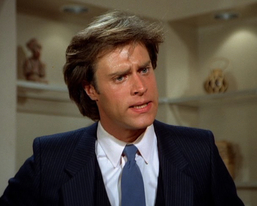 Jeff's madness spirals out of control when he tries to strangle Fallon. Adam admits to Alexis that he's been slowly poisoning Jeff to make him more malleable to them. Steven fibs to his Singaporean doctor and tells him his name is Ben Reynolds. 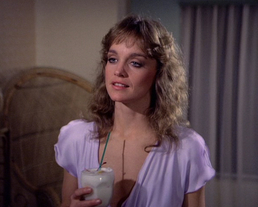 Fallon travels to Haiti to obtain a quickie divorce from Jeff. Adam offers Kirby a job as a French-English translator at ColbyCo. Jeff collapses during a tennis match with Mark and finally gets hospitalized. 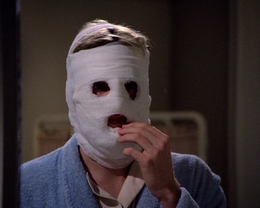 Jeff remains in the hospital and begins to recuperate from being poisoned. Fallon and Mark hang out together in Haiti, but keep things platonic. Steven's new face is revealed. 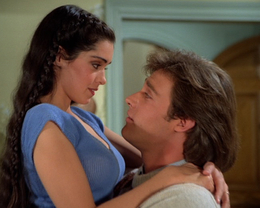 Blake enlists Andrew Laird to help him prevent a merger of Denver-Carrington and ColbyCo. Kirby professes her love to Jeff, and this time he's awake and reciprocates. Dan Cassidy phones Blake from Singapore to inform him that Steven may be alive. 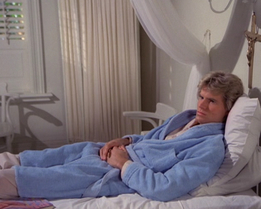 Blake flies to Singapore and has an awkward reunion with facially reconstructed Steven. Adam lures Kirby to a motel - but is thwarted from assaulting her again when Jeff comes to the rescue. Alexis is miffed when she learns that Mark and Fallon have become friends. 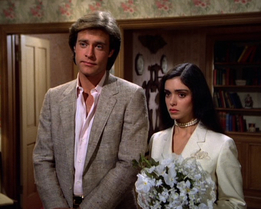 Blake convinces Steven to return to Denver to reunite with his family and meet his infant son. Jeff and Kirby fly to Reno for a quickie wedding. After rebuffing Alexis, Mark hits the sheets with Fallon. 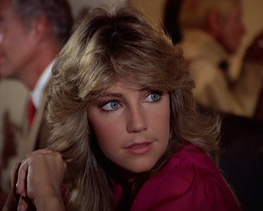 Steven goes to New York to try to reconcile with Sammy Jo, but she's not interested and tells him to go pee up a rope. Jeff and Kirby return to Carrington manor as husband and wife. Blake fights to prevent Alexis from convening a merger meeting with his board members. 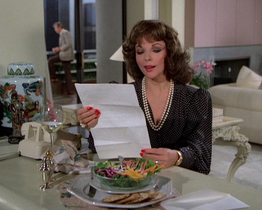 The Denver-Carrington board of directors vote to merge the company with ColbyCo. Steven hires a lawyer so he can file for divorce from Sammy Jo. Alexis' investigator digs up some dirt on Congressman McVane. 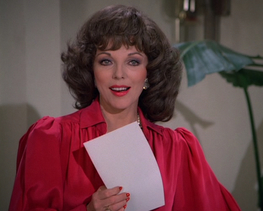 Krystle tries to host a reconciliation dinner for Blake and Steven, but her plans are derailed when Alexis sends Steven and Adam on a business trip in order to bond. Alexis tries to squash the budding romance between Mark and Fallon by making it look like she and Mark are hitting the sheets. Steven visits Claudia at the funny farm, and she still seems as loony as ever. 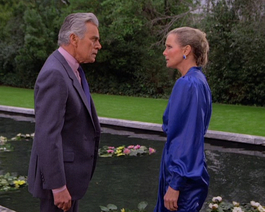 After a nasty argument, Krystle and Alexis wrestle around in a lily pond. Congressman McVane tries to strangle Alexis when he learns that she's responsible for outing his icky affair with a teenager. Fallon refuses to forgive Mark for hitting the sheets with her mother. 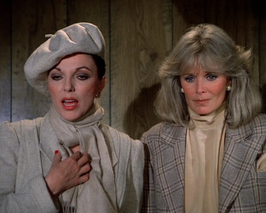 Alexis lures Krystle to a remote cabin, and both face grave danger when it is set on fire by a mystery arsonist. Blake is enraged when he learns that Steven and Chris are shacking up together. Fallon begins to suspect Adam of poisoning Jeff. Kirby is shocked to learn that Jeff is not her baby daddy.