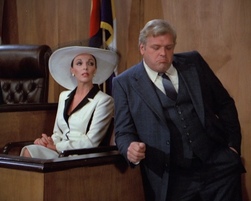 Alexis Carrington returns to Denver after a sixteen year absence to give damaging testimony against Blake during his murder trial. 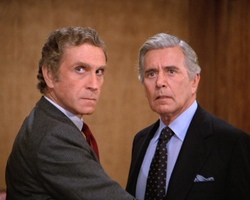 Blake is found guilty of voluntary manslaughter and sentenced to a measly two years of probation. Steven tries to reconcile with Blake, but the effort fails when Blake starts behaving like his regular douchebag self again. Krystle collapses and suspects she may be pregnant.

Claudia attempts suicide, but is saved when Blake enlists the help of Dr. Toscanni, who revives her from her overdose. Fallon is aghast to learn that Krystle's pregnant and tells Jeff she wants to make a baby. Alexis tells Steven that Blake isn't Fallon's bio dad, and Blake cops an attitude when he has to report in person to his probation officer. 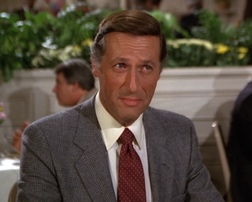 Krystle gets mad when Alexis takes the last of the roses from the garden, and makes it clear that she's an unwelcome presence on the estate. Alexis informs Cecil Colby that he's Fallon's father, then threatens to tell Blake about their affair unless he agrees to help Blake and Steven reconcile. Steven gets drunk during a reconciliation meeting with Blake, then suffers a head injury after he angrily bolts out of the mansion. 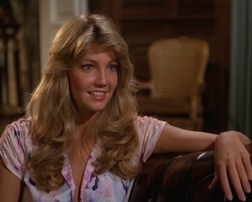 Steven regains consciousness, reconciles with Blake, and returns to Carrington manor to recuperate. Krystle invites her scantily clad young niece, Sammy Jo Dean, to stay at the mansion for a few weeks. Alexis hires a private investigator to dig up dirt on Krystle. 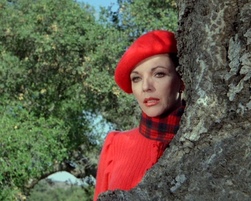 Blake travels to Las Vegas and closes a deal with Logan Rhinewood's people that will cover the cost of Cecil's loan repayment. Alexis urges Steven to settle down with a socially acceptable woman after she sees him and Sammy Jo kissing. Krystle is thrown from her horse after Alexis deliberately spooks the animal with her skeet shotgun. 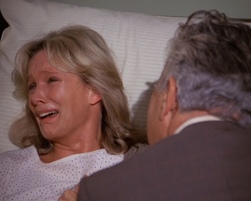 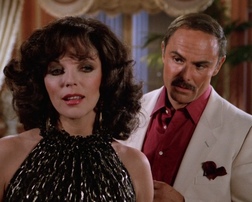 Blake grows increasingly impatient with Krystle as she continues to mope about not being able to have children. Alexis arranges a meeting with Rashid Ahmed in Rome and makes a deal with him to release Blake's oil tankers. Steven sows some wild oats with a call girl named Dottie, and Fallon learns she's pregnant with Jeff's baby. 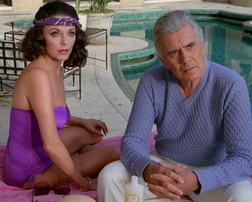 Alexis lures Blake to Rashid's villa in northern Italy for three days and pays a paparazzo to snap compromising photographs of what appears to be the two of them canoodling. Jeff begs Fallon not to abort his child, but she stubbornly insists on following through with her callous plans. Krystle turns to Nick Toscanni when she believes that Blake has been unfaithful to her. 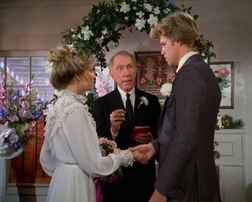 Fallon has a change of heart and decides not to abort her baby after all. After seeing the tabloid photo of Blake and Alexis canoodling, Krystle assumes that the two got it on in Italy and walks out on Blake. Steven and Sammy Jo sneak off to a Justice of the Peace and get married. 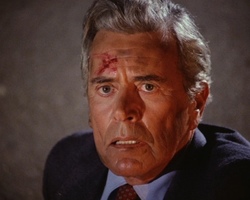 Steven and Sammy Jo return to the mansion after their elopement, but receive a less than enthusiastic reaction to their quickie wedding. Nick upsets Fallon when he makes it clear that he has no interest in a future relationship with her. Blake forbids Fallon and Jeff to divorce, so the two agree to stay married for the sake of their child. Blake is injured when someone intentionally blows up his car. 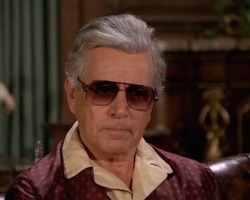 In the weeks following the dynamite attack, a blinded Blake is extraordinarily crotchety and threatens to launch a senate crime commission. Nick pressures Krystle to divorce Blake, but she remains wishy-washy on the subject. Sammy Jo feels slighted by the Carringtons and orders Steven to tell Blake about their quickie wedding. 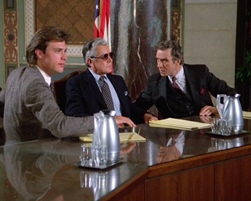 Blake testifies at the crime commission he somehow convinced a group of senators to launch...but when Logan Rhinewood pulls a no-show, the hearing is abruptly adjourned. Alexis tells Nick that Fallon is in love with him, but he still has no interest in hooking up with the vapid heiress. Sammy Jo gets fed up when Steven refuses to ask Blake for money, so she buys a really expensive mink coat and charges it to the Carringtons. Blake's hysterical blindness starts to wear off, but he doesn't tell anyone except Joseph. 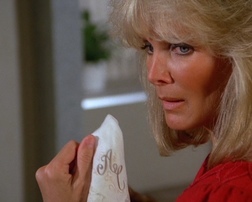 Alexis tells Blake about Sammy Jo's gold digging ways and warns Steven to make sure that Sammy Jo keeps her mouth shut about Blake not being Fallon's bio dad. Blake confronts Nick about the grudge he's been holding against him and convinces him he's not to blame for his brother's suicide, and this appears to put a sudden end to Nick's desire for revenge. Krystle ends her flirtation with Nick and once again attempts to leave Denver for good. Cecil tries to get Claudia to spy on Denver-Carrington, but she refuses. 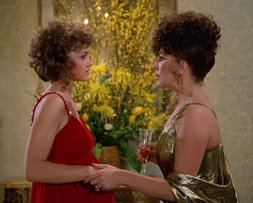 Fallon throws Steven and Sammy Jo a marriage celebration party...and Sammy Jo makes a spectacle of herself when she gets drunk and awkwardly jigs to muzak. Blake is confident that Krystle stayed faithful to him during her flirtation with Nick, so he finally tells her he's regained his sight. Fallon goes apeshit when she learns that Blake may not be her bio dad. 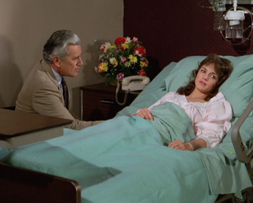 After Fallon crashes her luxury car in a big dirt pile, she's rushed to the hospital, where she gives birth to a premature baby boy. Claudia seduces Jeff, in order to steal his key to the file room at Denver-Carrington so she can obtain secret documents for Cecil. Alexis offers Sammy Jo $20,000 to leave town. 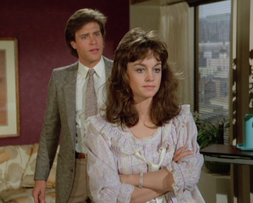 Fallon finally visits her sick baby in the NICU and decides she might give a hoot about him after all. Claudia is caught red-handed by Jeff as she photographs confidential Denver-Carrington documents, then later finds out that her husband and daughter are presumed dead. Blake is dismayed when he learns that Fallon knows he may not be her bio dad. 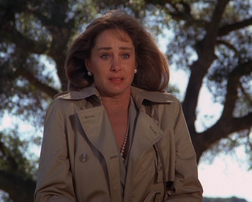 Blake finally gets a blood test, and it proves he's Fallon's biological father. Krystle rants to Blake about how fed up she is with Alexis and implores him to evict her from the property. Claudia intercepts a cable and learns that Matthew and Lindsay are presumed dead, then for some reason tells Krystle about her intention to shoot Cecil. 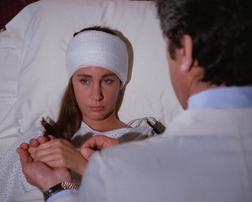 Claudia is rushed to the hospital after being accidentally shot in the head...and just mumbles nonsensically. Blake finally scores a meeting with the elusive Logan Rhinewood, who reveals himself to viewers as Cecil. Alexis seriously considers Cecil's marriage proposal. 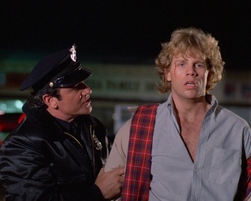 At Krystle's urging, Blake arranges for Claudia to complete her recovery at Carrington manor. Fallon and Jeff hit the sheets, and Jeff takes it as a sign that they're back on as a married couple. Steven befriends a weird guy named Dwayne in Santa Fe, but then gets "shaken down" when Dwayne demands $500 to keep from going public about a faux forcible homosexual liaison between the two of them. 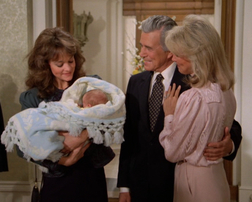 Fallon and Jeff bring their baby home from the hospital, and the servants of Carrington manor are forced to celebrate his arrival with a party. Steven insists on pleading 'not guilty' for punching Dwayne, which means he'll face a trial. Alexis agrees to marry Cecil, who suffers another bout of chest pain. Blake and Nick inform Claudia that her husband and daughter are definitely dead. 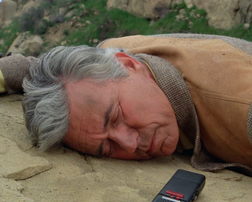 On the eve of his wedding to Alexis, Cecil suffers what appears to be a fatal heart attack. Fallon and Jeff freak out when Little Blake is kidnapped from his crib. Nick learns from Rashid Ahmed's brother that Blake is to blame for Gianni's death...so he travels to the dude ranch where Blake and Krystle are vacationing and confronts Blake on a mountain trail, then leaves him for dead. Claudia becomes increasingly squirrelly.