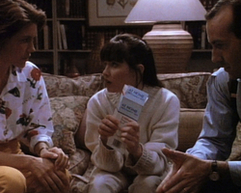 Brenda dumps Dylan after her pregnancy scare turns out to be a false alarm, and Brandon dumps his Peach Pit job to work as a cabana boy at the Beverly Hills Beach Club for the summer. 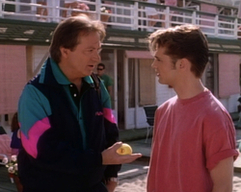 Brandon is befriended by a rich douchebag who's a prominent member of the Beverly Hills Beach Club, and is dismayed to learn that this middle-aged man is carrying on a sordid affair with the cute young waitress he was hoping to become more than friends with. 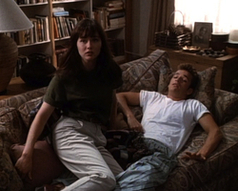 Dylan gets seriously injured in a surfing accident and is invited by Mama Walsh to recuperate at the Walsh house, but this doesn't go over so well with Brenda or Papa Walsh. 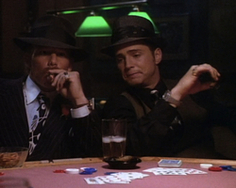 The gang sneaks into the Beverly Hills Beach Club after hours to play poker in the game room...but when the club is burglarized later that night, a cash-poor, alibi-less Dylan quickly becomes the prime suspect. 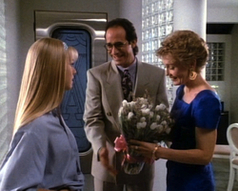 Kelly is aghast when her mother hooks up with David Silver's father, and Ahn-drea ropes Brandon into becoming a Big Brother to a troubled kid who's being physically abused by his mother. 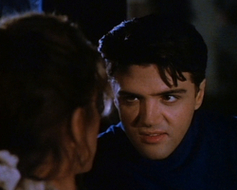 Brenda and Ahn-drea vie for the attention of their Elvis lookalike drama teacher, but he turns out to be a creep when he makes an inappropriate pass at Ahn-drea...and Brandon buys the '65 Mustang he's been saving up for all summer, but soon discovers it's a lemon with a bum engine. 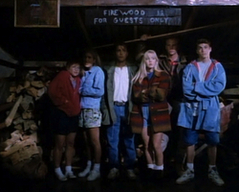 On the way to Yosemite Park, the gang gets detoured by a thunder storm and must spend the night in a leaky cabin where they bicker at each other non-stop and help ruin the wedding night for the couple who's honeymooning next door. 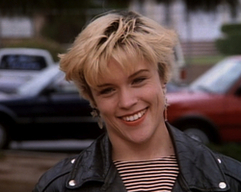 Emily Valentine transfers to West Beverly High and and rubs Brenda the wrong way when she goes on a date with Dylan, and then accepts an invitation to go on a date with Brandon the next night. 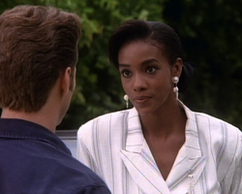 The Ashes, an African-American family, move into the Walsh's neighborhood at the exact same time the local residents create a security patrol...which makes things really awkward when the Ash daughter's boyfriend gets roughed up on the street for no particular reason by two douchey patrol officers. 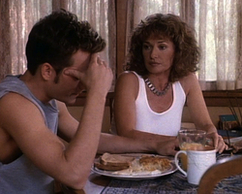 Dylan's mother, Iris, cramps his style when she comes to L.A. to live with him...so he starts spending a lot of time at a local pool hall, drinking and shooting pool with a greasy hustler named Falcone. 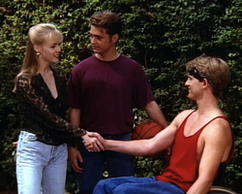 Cousin Bobby, a paraplegic, comes to town for a visit and falls for Kelly...but after a bad experience at a house party, he preemptively blows her off because he doesn't think she would ever seriously consider being in a relationship with a disabled person. 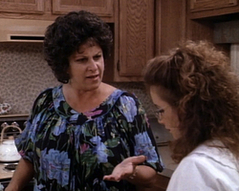 Ahn-drea has to move in with her douchey grandmother in order to make it look to the school district like she's permanently living in Beverly Hills and therefore eligible to attend West Beverly Hills High School. 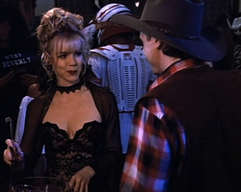 Kelly wears a skimpy costume to a Halloween party and is nearly assaulted by a creepy college guy who's dressed up as a cowboy. 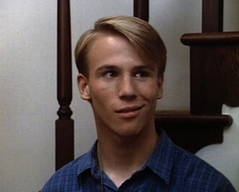 Scott Scanlon accidentally shoots and kills himself at his lame surprise birthday party that no one from West Beverly High had any interest in attending. 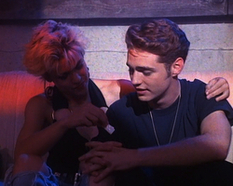 During a wild night out at a seedy underground club, Emily slips drugs to an unsuspecting Brandon, which ruins their relationship...and mercifully puts an end to their non-stop kissing. 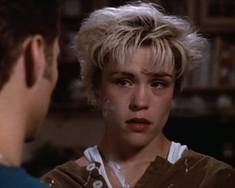 The shit hits the fan as Emily is faced with the aftermath of her stupid decision to spike Brandon's drink with Ecstasy (fictionally known on Beverly Hills, 90210 as U4EA) without his knowledge or consent. 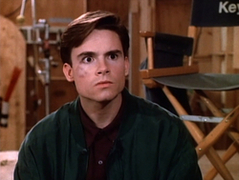 Steve's old nemesis, Chuck Wilson, reappears in his life and angers him when he asks Kelly to the winter dance, and then cruelly taunts him about being adopted. 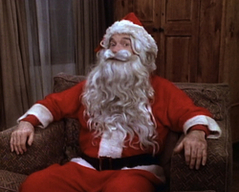 Steve travels to New Mexico to search for his birth mama, and the Walsh family hosts a festive Christmas Eve dinner for the rest of the cast members...along with a disheveled, ratty looking Santa Claus that Brenda drags home with her. 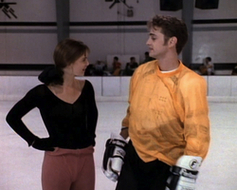 Brandon falls for a figure skater, but she's way too busy and focused on her sport to want to date him for more than a few days. 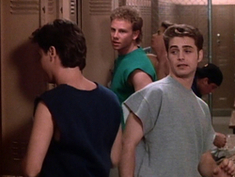 Brandon quits his job as sports editor of The Blaze to join the track team...but when he discovers that some of the athletes are taking steroids, he pretends to be an undercover journalist and rats them out. 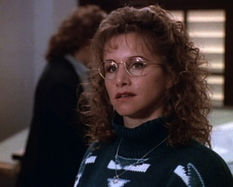 Ahn-drea goes on a crusade to make condoms available at West Beverly High...even though it probably wasn't all that necessary since there are plenty of drug stores in Beverly Hills where the teenagers can easily buy their condoms. 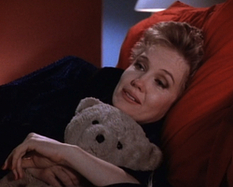 The relationship between Jackie and Mel nearly gets derailed when Kelly blabs to Donna and Brenda about Jackie's pregnancy, David blabs to Donna about Mel's intention to propose to Jackie, and Donna blabs to a few people about the pregnancy and the proposal. 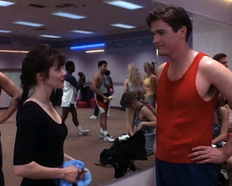 Brenda flirts with a dorky college guy who's in her cardio-funk exercise class, while Dylan encounters Dumb Betty at an AA meeting and tries to help her kick the bottle. 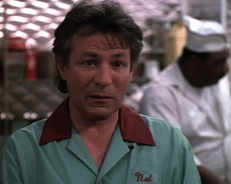 A developer's plans to build a new shopping mall could mean the end of the Peach Pit, artery hardening mega-burgers, and Nat's cheesy presence on the show. 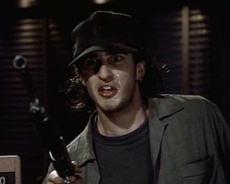 Brenda is held up at gunpoint while studying for midterms at the Peach Pit, and the cuckoo behavior she exhibits soon afterward is eventually diagnosed as Post Traumatic Stress Disorder. 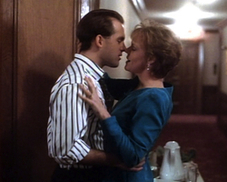 When Color Me Badd comes to town, Donna, David, Brenda, and Kelly skulk around the Bel Age Hotel to try to meet them...and while they're doing that, Donna discovers that her uppity mother is having an affair. 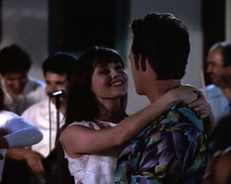 Brenda defies her parents when she tells them she's spending the weekend at Kelly's house...but is really going to Baja with Dylan. 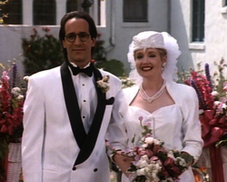 Mel and Jackie get married at the Walsh house due to improbable flooding problems at Jackie's house, and Papa Walsh and Dylan have a big fight that puts his noxious relationship with Brenda at risk.