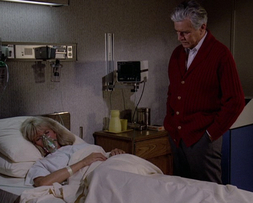 Mark saves Krystle and Alexis from burning to death in a fiery cabin...but is later arrested for arson. Alexis appoints Jeff to run ColbyCo while she recuperates in the hospital. Kirby throws herself off of a horse in an attempt to have a miscarriage. 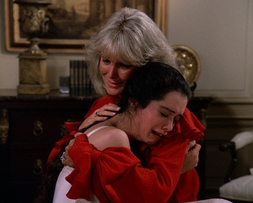 Kirby continues to wig out about carrying Adam's spawn after not suffering a miscarriage. A mystery stalker tries to smother Alexis with a pillow during her hospital stay. Joseph commits suicide after making an unintelligible phone call to Blake. 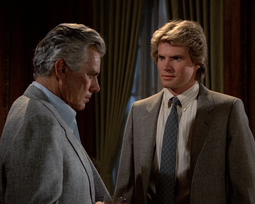 Kirby mourns the loss of her father and reveals to Krystle that Adam is the father of her baby. Claudia is released from the funny farm and hits the sack with Steven. Blake threatens to file for custody of Danny. 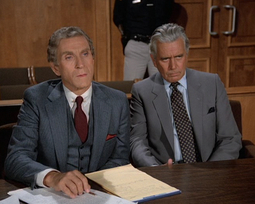 Blake loses his cool while testifying at Danny's custody hearing, and Sammy Jo offers to return to Denver and testify against Steven. Kirby tries to strangle Alexis as payback for Joseph's suicide, and is later dismayed to learn that Adam has moved into the mansion. 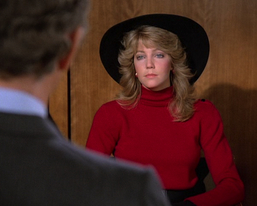 Sammy Jo returns to Denver to testify against Steven in the custody lawsuit. Adam gets alarmed when he learns that Jeff and Fallon are in Montana, investigating a possible link between him and mercuric oxide. 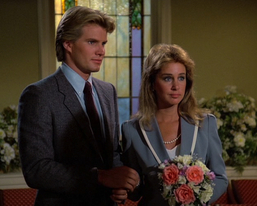 Steven and Claudia elope to Reno and are later awarded custody of Danny. Fallon and Jeff find proof that Adam poisoned Jeff in Season 3. Krystle convinces Kirby to tell Jeff the truth about her baby daddy. 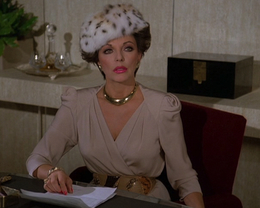 Adam frames Alexis for Jeff's poisoning and convinces Blake that she was the culprit. Krystle accepts the position of Public Relations head at Denver-Carrington, which enrages top-executive-wannabe Tracy Kendall. Kirby suspects Jeff and Fallon of having an affair. 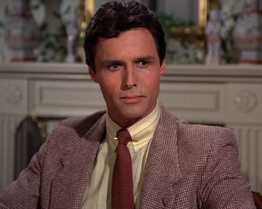 Alexis agrees to cancel the merger of ColbyCo and Denver-Carrington, and gets unexpectedly smooched by newcomer Dex Dexter. 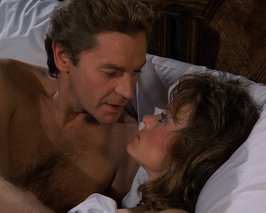 Fallon is charmed by Peter De Vilbis, a handsome stranger she meets at a horse track in Los Angeles. Alexis continues to be wooed by Dex. Jeff learns that Kirby was raped by Adam, and that the psycho is her baby daddy. 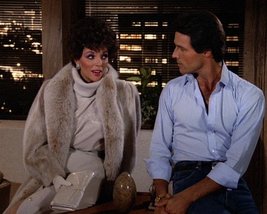 Alexis enters into a business deal with Dex, but refuses to succumb to his charms. Blake pops the question to Krystle with a ginormous diamond ring. Jeff confronts Adam about raping Kirby, then informs him that he's her baby daddy. 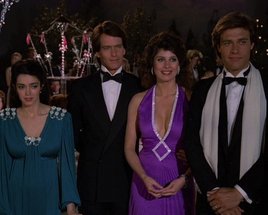 Blake and Krystle announce their nuptials at the star-studded Carousel Ball. At Fallon's prompting, Peter sells half interest of his race horse, Allegre, to Blake. Jeff takes an instant dislike to Peter. 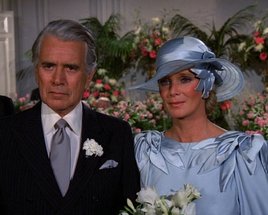 Blake and Krystle tie the knot a second time. Alexis finds out where Blake and Krystle are honeymooning and arranges a faux business trip at the same time and place. Kirby is revulsed when Adam proposes marriage. 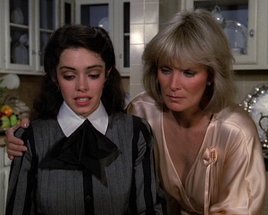 Dex presents Alexis with an extravagant necklace to demonstrate how intensely he worships her. While Steven is away on business, Claudia fears for Danny's safety and moves her family into Carrington manor. Kirby is alarmed at how puffy her fingers are becoming. 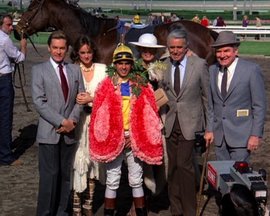 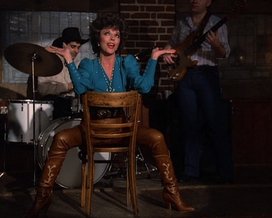 Blake receives a ransom note from Allegre's kidnapper. Alexis and Dex travel to Wyoming to purchase a plot of oil-rich land from a yokel. Kirby is admitted to the hospital and diagnosed with preeclampsia. 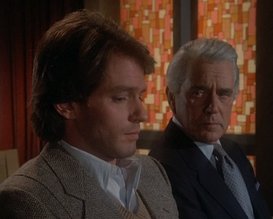 Kirby's health worsens, and she undergoes a Caesarian. Peter pays Allegre's kidnappers the $2 million ransom. Adam confesses to being the mastermind behind Jeff's poisoning. 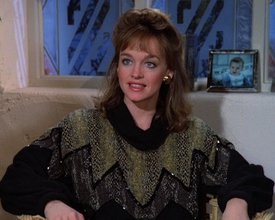 Fallon is distraught when she learns that Peter has been conning her for Blake's money. Dex proposes to Alexis, but she isn't interested. Tracy plots to bring Krystle down so that she can take over as PR head at Denver-Carrington. 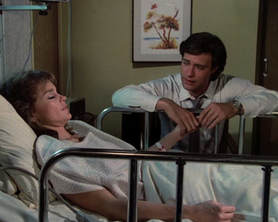 Fallon regains consciousness after being hit by a car, and is freaked out when she appears to be paralyzed from the waist down. Blake agrees to become State Chairman for the Party. Kirby agrees to marry Adam...again. 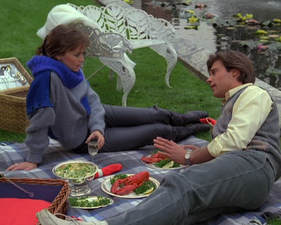 Fallon is cured of her faux paralysis when she has to jump into action to rescue Baby Blake from possible drowning. Alexis taunts Kirby with the news that her mother is a murderess who's currently serving time in prison. Claudia continues to receive weird packages in the mail. 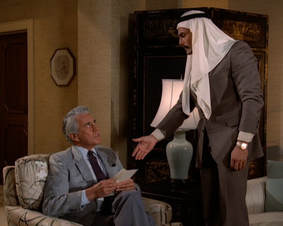 Claudia jets to Peru to investigate Matthew's fiery jeep accident. Blake and Tracy travel to Hong Kong to have a business meeting with Rashid Ahmed. Fallon begins suffering from headaches. 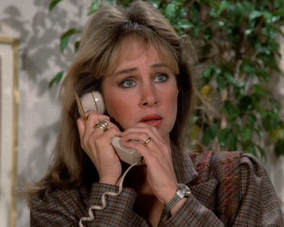 Blake fires Tracy after she makes a pass at him in Hong Kong. Alexis is miffed when ColbyCo gets shut out of the South China Sea oil deal and plans a rendezvous with Rashid Ahmed. Jeff proposes to Fallon. 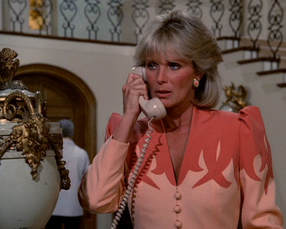 Dex ends his relationship with Alexis after he catches her cheating on him with Rashid Ahmed. Krystle and Claudia learn that an audio tape is behind her puzzling phone calls from Matthew. Fallon's headaches persist. 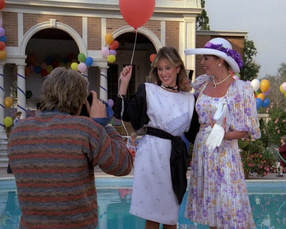 Fallon's brain scan shows no sign of injury, Little Blake celebrates his second birthday with a grand party, and Blake is double-crossed in a startling way by Rashid Ahmed. 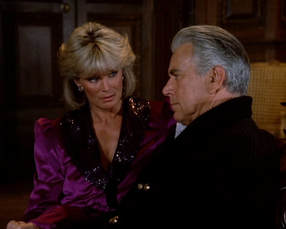 Blake tries to get his $100 million back from the botched South China Sea deal, but fails. Mark blackmails Alexis for 100K. Kirby's attempt to shoot Alexis is thwarted. Sammy Jo makes a reappearance. 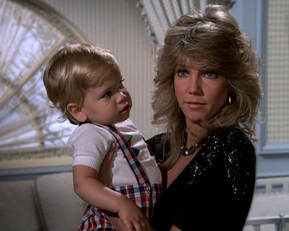 Blake's request for a loan extension is denied by all the banks. Alexis informs Dex that their relationship is definitely, absolutely, totally over. Sammy Jo starts to make more semi-regular appearances in Denver. Mark is found splatted on the street after falling from Alexis' penthouse balcony. 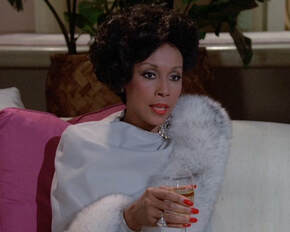 Blake sells off various assets to raise money to repay his $100 million loan. Tracy quits ColbyCo in a blaze of glory. Sammy Jo announces that she's in Denver to stay. A mysterious woman arrives in Denver and shows a peculiar interest in Alexis. 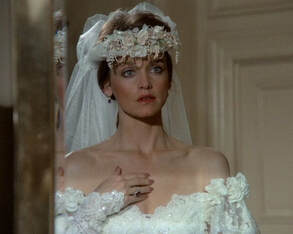 Kirby dumps Adam and leaves town. Sammy Jo tells Steven she's going to seek custody of Danny. Alexis is arrested for the murder of Mark Jennings despite zero evidence. Fallon suffers a headache and, instead of seeking medical help, dramatically flees the mansion on her wedding day.